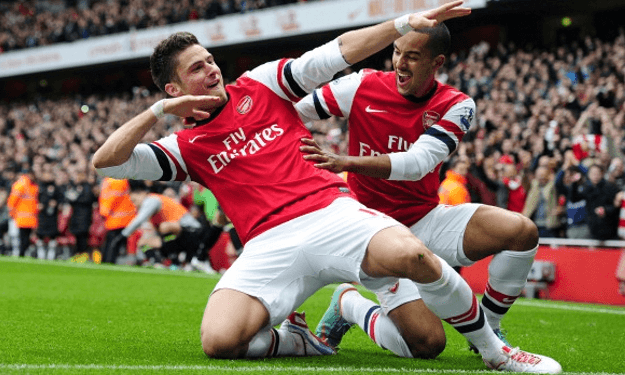 Arsenal F.C. are the longest residents in the top tier of English football, having been there since 1919. They have won 27 major trophies in that time, including three domestic Doubles.

Here we provide information on the history, ownership and some statistics about this popular football club:

First named Dial Square, the club were formed by workers at the Royal Arsenal in Woolwich in 1886. In 1893 they became the first team from the south to join the Football League under the name Woolwich Arsenal. In 1904 they were promoted to Division One.

Arsene Wenger was appointed manager in 1996 and led Arsenal to win the Double in 1997-98. In 2002 the club won the Double, ending the season with a run of 13 consecutive league wins. Regaining the title in 2004 Arsenal F.C. dubbed “The Invincibles”, remained unbeaten through the 38-game campaign, the first time a top flight English team had achieved such a feat since 1889. They took their unbeaten run to an English-record 49 games in 2004-05, the same season they won the FA Cup final. That would be last trophy of the decade for Arsenal F.C.

In 2014, winning the FA Cup Final lead Arsenal F.C. to qualify for the 2014 FA Community Shield, which they won. Nine months later, Arsenal won the FA Cup final for the second year in a row. In 2015, Arsenal earned their fourteenth Community Shield title. Although they won this silverware the club is not considered a serious contender for the English Premier League title. Bookmakers bet on Manchester City, Manchester United and Chelsea and write off Arsenal. However bet365 is still offering the best odds when it comes to Arsenal winning the EPL title. Feel free to read a detailed review of bet365’s betting app and decide, if you like their platform and if you want to bet on Arsenal winning their first domestic title since 2004.

For many years Arsenal F.C. away colours were white shirts and either black or white shorts. In the 1969–70 season, Arsenal introduced an away kit of yellow shirts with blue shorts. A green and navy away kit was introduced in 1982–83. The following season, Arsenal returned to the yellow and blue scheme, albeit with a darker shade of blue than before. Since 2009, the away kit is changed every season.

Initially, Arsenal F.C. played at the Manor Ground in Plumstead, apart from a three-year period at the nearby Invicta Ground between 1890 and 1893. Stands and terracing were installed for their first Football League match at Manor Ground in September 1893.

Widely referred to as Highbury, Arsenal Stadium was the club’s home from 1913 until 2006. The stadium was overhauled in the 1930s when new Art Deco West and East stands were constructed. Capacity at Highbury was 57,000, but conversion under Premier League regulations to an all-seater stadium in time for the 1993–94 season reduced capacity to 38,419. From 1998 to 2000, Arsenal F.C. played Champions League home matches at Wembley, with a capacity of 70,000.

Unable to maximise match-day revenue, a new 60,361-capacity stadium at Ashburton Grove was built. Now named the Emirates Stadium, after the teams sponsors, the stadium opened in 2006 and will be officially known as Emirates Stadium until at least 2028.

Arsenal F.C. fans often refer to themselves as “Gooners”, derived from the team’s nickname, “The Gunners”. The fan-base is estimated at 113 million and virtually all home matches sell out.
The Arsenal Football Supporters’ Club, the Arsenal Independent Supporters’ Association and the Arsenal Supporters’ Trust are the largest UK supporters groups along with some major national and local companies and their staff along with several overseas groups and fanzines.

The largest shareholder on the Arsenal F.C. board is American sports tycoon Stan Kroenke, who as at June 2015 owned 67.02 percent and Red & White Securities 30.04 percent. Ivan Gazidis has been the club’s Chief Executive since 2009.

The business magazine Forbes valued Arsenal F.C. as a whole at $2.0 billion (£1.4 billion) in 2016.
Arsenal’s financial results for the 2014–15 season show group revenue of £344.5m, with a profit before tax of £24.7m. Arsenal F.C. is ranked seventh among world football clubs. Match day revenue is £100.4m, more than any other football stadium in the world.