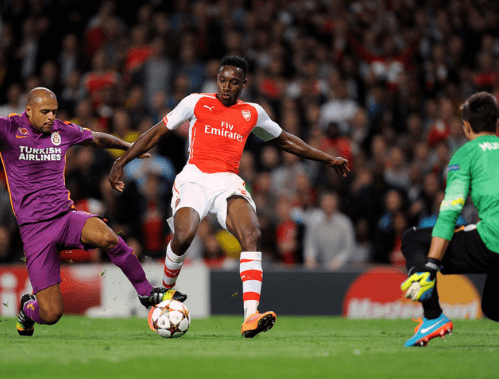 It was all Danny Welbeck could do not to chip it. Bearing down on goal with the goalkeeper hotfooting it off his line, Welbeck’s thoughts would have turned to his miss on his debut against Manchester City – or that chance for Manchester United against Bayern Munich – when he decided to chip the goalkeeper. Had he pulled it off, we would have been talking about an audacious piece of skill, a moment of daring that epitomised this precocious talent. Indeed, when he chipped Joe Hart, the goalkeeper was flummoxed by the shot though the ball bounced excruciatingly back off the post. Sometimes, however, the chip is the best option. Instead, against Borussia Dortmund, with the score at 0-0, Welbeck hesitated ever so slightly and sent a tame shot wide of Roman Weidenfeller’s post. Arsenal would later lose 2-0.

Thankfully, Danny Welbeck would make no mistake when the opportunity to chip presented itself again this time against Galatasaray, and with the confidence of two goals already behind him, he poked the ball calmly over the onrushing goalkeeper. “The third goal was probably the hardest because I was stretching for it, I’ve been in that position a few times, trying to chip the keeper. Sometimes it goes in, sometimes it doesn’t.”

It’s this bouncebackability that Arsene Wenger preaches from his strikers, and why Welbeck endears so much to him because he believes finishing is a learned skill tha can be practiced on the training ground – while Welbeck already does everything else well – and you only worry when the team is not creating the chances. Against Galatasaray, Arsenal were clinical, scoring from the first real chance that fell to them, and with each goal Welbeck (and Alexis Sanchez), showed real composure to tuck the ball away.

Understandably, it’s taking a while for Welbeck to develop this side of his game and it shows the short-sightedness of football that Welbeck was previously judged so harshly on his goalscoring record. Ahead of him he had Wayne Rooney and Robin van Persie, two strikers who had to adapt their game from being attracted to the ball too much from when they were younger to developing a blood-thirsty appetite for finding the back of the net. Wenger calls this instinct “animalistic.” As Rooney explains, he did “too much running,” when he was younger, “and then didn’t have the energy to get into goalscoring positions in the box. I’m a cleverer player now and know when to run into the box and when not to, and as a result more chances have come my way and I’ve scored a lot more goals for the club.”

Welbeck probably fell victim to this demand at Manchester United where, because he had all the tools to be an explosive striker, goalscoring was expected to come naturally. It’s this sort of paradox modern striker have to juggle because although they are asked to do more – to drop off opposing centre-backs, hold the ball up and make runs behind, whilst pressing aggressively – they have to also find a way to be more economical with such movement. Speaking at a UEFA coaching conference, Roy Hodgson remarked:

“I wonder how this will evolve. There is a danger that this job will become too lonely and too difficult. In many cases, the striker is not just expected to act as a target and to hold the ball up, but also to do a lot of chasing and to work hard as the first line of defence.”

Former Juventus coach coach Antonio Conte cited Atletico Madrid’s Mario Mandžukić as an example of the new breed of striker who possesses extraordinary athletic qualities and is, as he put it, “defensively aggressive and committed with a selfless attitude towards defensive duties.”

The after effect of this quest for the apotheosis is that it has created three layers of strikers where once there were two: the best and the rest. Now, is the age of the super striker*: a level beyond what would normally be considered great and out of reach of the rest making them look like footballing Ali Dias; where the achievements of a select few, namely Lionel Messi and Cristiano Ronaldo, have distorted the market. Where once scoring 20+ goals a season was considered the gold standard, now it is the bare minimum expected of a top-level striker.

Welbeck’s hat-trick against Galatasaray goes some way to proving that he’s not such a bits-and-pieces purchase that some had suggested when Wenger splashed £16million out on him in the summer transfer window. Instead, he’s an amalgamation of a number of different types of strikers. He can play within any tactical framework, whether as wide forward in Arsenal’s 4-3-3 or as a spoiling presence just behind another striker, picking the pockets of opponent playmakers with his long legs. Or more traditionally, he can function as a poacher or a target man.

Indeed, Welbeck in the past has been likened to Nwankwo Kanu by Sir Alex Ferguson which is good news for Wenger whose fetish has been to clone a more mobile version of the Nigerian striker. Indeed, taking account of the tall, rangy strikers he has brought in during the last 15 years, you can almost chart the evolution as a sort of linear sequence starting with Kanu and ending, hopefully, with Welbeck.

When Wenger signed Emmanuel Adebayor he labelled him as like “Kanu with pace”; with Sanogo he said that “he has similar strengths, strong of body, but as well technical skills.” Welbeck meanwhile, has been described as having the “perfect style to play through the middle.” In between, Marouane Chamakh and Olivier Giroud can be seen as aberrations in the perfect genetic line: an over-indulgence in one quality – technical ability – over the other key component of Arsenal’s play: mobility.

Of course, Kanu, in the Wild West days of the Premier League was an extremely artful striker with a deceptive turn of pace, but he probably veered slightly too much to the side of maverick talent. Adebayor, on the other hand, never really won over the fans with his languid style whilst Sanogo is the opposite; endearing to fans after his performance in the FA Cup final as a defence-stretching-forward scuffler creating space for Arsenal’s other more imaginative players to play.

Danny Welbeck is more rounded: a lovely mover around the football pitch who principally tends to float towards the left-hand side, though when he does get the big chances, it usually happens from the right. That shows you the measure of the player that he is because Welbeck’s game is all about sudden little bursts – what coaches call “high intensity sprints” – be it closing down opponent defenders in order to force a mistake or make darting, arrowing runs into the box. His goals against Galatasaray showed how his timing is getting better and the improved understanding he has with his teammates. His hat-trick goal to dink the ball over the ‘keeper was probably his best although the second goal was typical Welbeck: robbing the central defender of the ball, shrugging him off with a dismissive swat of the arm and then finishing Henry-like into the bottom corner.

The other impressive facet to Webeck’s play has been his link-up which is tidy and accurate. His pass success is 86% in the league, a massive improvement on Olivier Giroud’s erratic 68% from last season. Giroud, though, contributed to Arsenal’s play due to his neat flicks and tricks bringing others into play, often acting as a wall to play passes off. Welbeck is a bit different, more likely to end up at the end of moves, but when he drops off too he can be very effective, helping the way Arsenal like to play when they set up triangles on one side on the pitch, then switching the play quickly to the other side. He did this very well against Aston Villa, in particular stoking up an intelligent partnership with Mesut Ozil with both seemingly never too far away from each other. In the 3-0 win they combined 18 times, and two of those times led to goals. Against Galatasary, the combinations were more varied: Welbeck was slipped in by Alexis and Oxlade-Chamberlain for two of the goals. The other was from a Galatasaray mistake. Each time Welbeck finished with great aplomb.

*The most interesting aspect of the super striker is that they come in all shapes and sizes due to the prevalence of the single striker system. With most top level teams playing a variant of the 4-3-3/4-2-3-1, the strikers’ strengths (and weaknesses) can be balance out in a system that covers all bases. For example, in Barcelona’s treble wining side of 2012, Pep Guardiola used David Villa as the more traditional poacher-like player, making runs behind, but he played mainly on the left while Pedro stretched play in the other side. Behind them they had a myriad of ball players that could find them easily but the chief creator and goal-getter was Lionel Messi who, as a false 9, was now given the freedom to pop up wherever he liked.

The most prominent super strikers are Messi, Ronaldo and possibly Zlatan Ibrahimovic and Luis Suarez. Aiming to join them or were once in the list but slipped out are Robin van Persie, Neymar, Diego Costa, Radamel Falcao, Mario Mandzukic, Edinson Cavani and Robert Lewandowski.