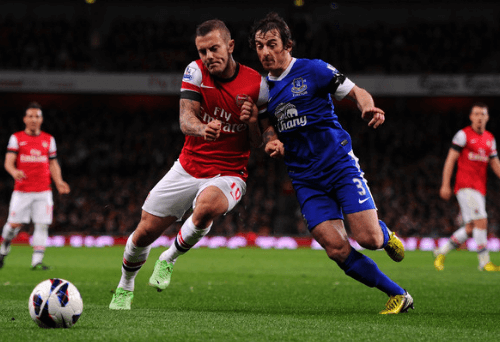 So it is then an unlikely source, César Azpilicueta, we refer to touch on what is at heart, the story of Arsenal’s season. In an interview with Sid Lowe for the Guardian the defender said that “a team is constructed with time and automatismos, habits, mechanisms” so as such, progress will occur gradually. That is surely the case with Arsenal.

Of course, there’s the other side of teambuilding which Chelsea in the past certainly have done and that is to buy “special players”; those players who lessen the adjustment period. Arsenal’s youngsters will soon get to that level but considering the signings made in the summer and the relative age of the squad, that is what it is: a new team. Against Everton on Wednesday evening, we saw those habits and patterns still struggling to form into one collective identity.

In the first-half of the 0-0 draw, Everton harassed Arsenal on the ball and marked them tightly to ensure that they never got into their usual passing rhythm. Arsenal stuttered and failed to get away. By the same token, Everton didn’t really threaten either – more on that later – and by the half-time whistle, both sides were separated by only one pass. In the second-half though, Everton relaxed and allowed Arsenal onto them in the hope of profiting from the gaps on the counter-attack, but held firm.

Arsenal looked disjointed, held together by one outstanding individual – Santi Cazorla – but in the end, creativity was stifled as they managed only 11 shots. And although Everton mustered only one more shot, it was at the back, strangely to say of them, that Arsenal looked more of a unit. Of course, this only confirms what Azpilicueta said at the start: that it’s easier to coach synchronicity at the back. Going forward, instinct and understanding cannot be taught; it’s developed over time. When Arsene Wenger committed his five Brits to the club – and later added Theo Walcott too – this is what he had to say:

“Technical stability is important and the game we want to play demands a little bit of blind understanding, therefore it is important that we keep the same players together.”

Tactics and formations only go some way to addressing the nuances of balance and understanding. So as such, it might be better, after watching the draw with Everton, that Arsenal adjust their 4-2-3-1 to make it closer to a 4-3-3 because patently, Jack Wilshere is having a bit of trouble at the tip of the midfield. Of course, he’s still a bit rusty having just returned to the side from injury and he has too much attacking potential to not use him from the start. But Wilshere’s movement to get on the ball in the two sixty minutes he has played so far has left a lot to be desired.

Often against Everton, he dropped deep to try and escape his markers. And often, he didn’t receive the ball from the defence because there was no need. Mikel Arteta was there. And in any case, Laurent Koscielny is so good on the ball that what he needs is somebody forward to hit to. In contrast, Aaron Ramsey’s running was more intelligent, bursting forward into spaces behind the Everton midfield – where Jack Wilshere might have been – or moving wide to offer support. Other times, Santi Cazorla would drift into the attacking midfield position because Jack Wilshere wasn’t there. Indeed, Cazorla and Ramsey combined for the best chance in the first-half by creating an overload on the right before Ramsey whipped a cross into the penalty area which Olivier Giroud contrived to miss.
This conundrum, however, is nothing new to Wenger, Cesc Fabregas initially had trouble adjusting to picking up the ball with his back to goal. Wilshere similarly likes to collect the ball with his body to the goal so he can drive at the defence. When Wilshere got the opportunity to do that against Everton, it was because Arsenal had successfully penned The Toffees back in their own half.

Given that Wilshere has only just returned from injury, it was a surprise nevertheless, that he started given Tomas Rosicky recent form in that position. If Rosicky as well wasn’t quite fit, Santi Cazorla is the type of player who can make Arsenal tiki-taka from attacking midfield. But Arsene Wenger understandably didn’t want to upset the balance of his team and fielding Cazorla in a roaming role on the left allows him to field another creative midfielder. However, given the relative newness of the team, perhaps it’s not such a problem for Arsenal to depend on Cazorla for this moment because he’s just that good. (And indeed it’s arguable, without the right balance, Cazorla suffers in the wide role because he’s denied the freedom to roam laterally in the final third. In any case, he still does although it’s not without its risks).

At the end of the season, Arsenal’s position in the Premier League table will be the barometer which people will judge whether the team has made progress or not. But it doesn’t tell you the whole story.