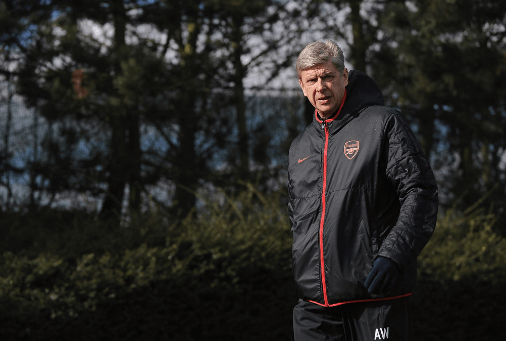 March. Having been befuddled by Bradford City in the Capital One Cup, bounced out of the FA Cup by Blackburn Rovers, and humiliated at home by Bayern Munich, Arsenal squared off against Tottenham Hotspur at White Hart Lane. And lost. They were now seven points behind Spurs in the race for the last Champions’ League spot.

Raise your hand if at this point, you thought Arsenal might finally be forced to play European matches on what has affectionately become known as “Spursday.”

I did. I thought the poor finishing from Giroud and Gervinho was going to get us. Or the defence, for years plagued by horrendous individual mistakes would. Or that the general drain of talent that comes from selling your best players year after year would finally bite Arsène Wenger and the board in the ass. Yet, that’s not what happened. For the second year running, Spurs failed to mind the gap. Andre Villas-Boas and company continued to fight for glory in the Europa League, while Arsenal went on a practically unprecedented run in the PL, and once again the Gunners are in the Champions’ League and Spurs fans get the joy of yet another prime showing on ITV Thursday nights.

Which team is the real Arsenal though? Is it the one that was so incredibly frustrating to watch from August to March? Or is it the one that was nailbitingly good for the last two months of the season? A bit of both, probably. I can tell you one thing though – neither of those teams are good enough to win a championship. And finally, after eight long years, the new commercial deals are coming online. The league is more open than it has been for two decades. A championship is exactly what Arsenal should be striving for next season.

To do that, however, they will need better players.

It’s only a minor exaggeration to suggest some Arsenal fans were left with emotional scars from Wenger’s myriad Deadline Day Discount Deals! that saw future superstars like Park Chu Young, Andre Santos, and Sebastien Squillaci pull on the fabled kit. Combine that with the continual buying and touting of teenagers you hope will eventually, one day, maybe-by-the-time-your-kids-have-entered-university grow into the next Cesc, and Arsenal fans have endured nearly a decade of transfer abuse few fanbases can relate to.

Thankfully, that era looks to be done. The plan worked. Arsenal turtled in the transfer market for years, still managed to stay in the Champions’ League, and the commercial and Premier League television deals have dramatically increased revenue to the point where Arsenal can finally spend like the big team they are.

The thing is, just spending a lot of money isn’t guaranteed to get you anything. Liverpool proved that under Damien Comolli, and Newcastle have seemingly been proving the same thing for most of their time in the Premier League. However, contrary to what Wenger might suggest, it is okay to spend a lot of money on players, provided they are the right ones. But how do you find your true transfer loves?

By letting statistics guide the way.

Today I’m going to focus on three major areas of need for Arsenal this summer, and provide multiple options in different budget and age ranges for each need. In my opinion, every one of these would be at least a “good” option, and a few of them are already legitimately great even most fans don’t even know their names yet.

A few short rules before we get started:

1) Arsenal are willing to break their current wage structure, but would still be extremely unlikely to pay players £200K in wages per week. This means that although Wayne Rooney would likely be outstanding at Arsenal, his signing would be a huge long-shot.

2) Arsenal are also willing to break their transfer record, but that means spending up to £30M for a single player, not the £50-60M that would be required to buy someone like Cavani. This isn’t actually that big a deal, because there are very few players who are remotely worth that type of money in the first place, especially if you are doing smart shopping.